The new trend of building expensive double storey houses is sweeping through the townships as home owners are turning their small crammed abodes, associated with the township lifestyle, into skyscrapers that could give houses in the suburbs a run for their money.

Whether it’s for space, a good view or just to show off, the building boom in the township is experiencing a new vertical designs which are giving construction a whole new meaning.

Mother and homeowner Leanne Ngwane owns a double storey house in NU 17 Mdantsane, and is one of the homeowners who decided not to follow the exodus by many to the East London suburbs in order for them own a luxurious house, but opting to stay in the township and renovate her house.

“After 1994 many people moved to East London but my husband and I decided otherwise, we stayed and renovated our house because our friends and families are here. Imagine having to travel 25 kilometres just to visit them each time and again we have a business here in Mdantsane so it made sense to stay here. We decided to go with the double storey design because we wanted to bring the feel of the suburbs to the township. Also we have amenities close by like the library and a mall, and the general improved infrastructure around the township means better value for our houses, “she said. 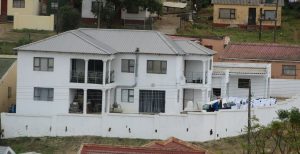 Bongani Mini said that although he was satisfied with his two- bedroom subsidy house in Golden Highway, one of the upmarket areas in the township, he felt the need to renovate and expand his house because it was a bit simple for his taste.

“I like to be different and when I decided to renovate I decided to go up on one side of the house, I wanted to convert the whole house into a double storey house but my wife did not share my vision.  I now can brag and say I enjoy one of the most beautiful views of the township because my house is perched on a hillside, overlooking the main road, natural vegetation and part of Mdantsane, “ he said.

Elliot Velaphi owns one of the oldest double storey houses in NU 15 Mdantsane, which was built in the late 80’s when such designs were few. He is proud to own what has become a landmark and which is now one of the trailblasers that paved the way for the now popular design.

“I used to drive by this house and never thought I would one day own it because I thought it was not affordable. Years later it was on the market and my wife loved it and she persuaded me to buy it because of space. Now I can accommodate my whole family and my friends as our band practise here,” he said.

GALADA WAS A MAN OF GOD TAKEN TOO SOON

RURAL FESTIVAL PROVING TO BE A HIT WITH COMMUNITY

BCM NEEDS A PLATFORMS TO FOR LOCAL STORIES

This website uses cookies to improve your experience. We'll assume you're ok with this, but you can opt-out if you wish. Accept Read More